ICAI Invites Suggestions On Enhancement Of Audit Independence And Accountability 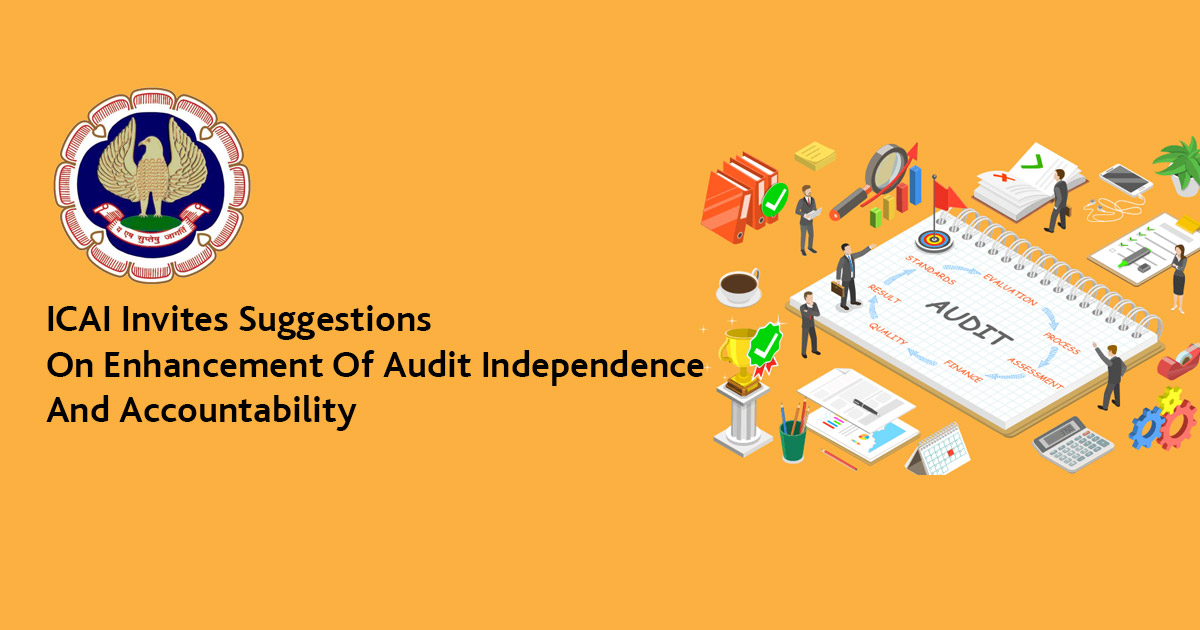 ICAI is visioning to enhance audit independence and accountability and for the purpose, the institute has invited the suggestions/comments on Constitution Paper from the members who will thoroughly examine the audit provisions and give their thesis on the same.

Memorandum by ICAI says: ICAI invites suggestions/comments from members on Consultation paper to examine the existing provisions of law and make suitable amendments therein to enhance audit independence and accountability by 12.00 Noon on 21st February 2020.

Ministry of Corporate Affairs, India has currently issued the Constitution Paper with the intention to let the members examine the prevalent provisions and introduce the changes that will enhance the management of audit processes. The reviews are welcomed till 28 December 2020, eight days from the issue of the constitution paper.

However, the Concept Paper includes the provisions of Auditor Independence that will authorize the auditor to carry forward with the audit freely and in a legitimate way. Shareholders in a company have the power to collectively appoint the auditor but the ultimate decision of appointment or dismal remains in the hands of the management. The law is again challenged here as it is doing no justice to the decision of the shareholders.

Further, the auditor’s accountability is not limited to the interests of the shareholders but is also responsible for making the public documents relied on by various stakeholders including Financial Institutions, Government and the general public.

Another considerable point is the auditor so appointed may have a financial or any other interest in the client’s business that might influence his/her judgement or reports and finally lead to a conflict of interest. Paying heed to all the aforesaid circumstances ICAI has called for suggestions/comments from the members by 12 Noon on 21st Feb 2020.

Ministry of Corporate Affairs (MCA) issued the Consultation Paper on 8 February 2020 and invited the members to present their reviews or suggestions on the amendments in the provisions of the audit. The last date to submit the reviews is till 28 February 2020.

ICAI is seeking genuine suggestions from the members, especially on the below factors so that the institute further keeps the effective ones in front of the MCA on the consultative paper:

#1. Changes that should be incorporated in the Audit Provisions to improve the independence of Auditors

Regulatory changes focusing on Rotation of Auditors, the fixed time period of audit appointments (5 years + 5 years), contract termination policies of audit firms, the prohibition of non-audit services u/s 144 of the Act, powers to be given to the institution of the Audit Committee and Independent Directors, etc.

#2. How can one determine the fees of the auditor? Should it be based on the time period and expertise required for the audit?

ICAI has set the minimum allotment of fees for the auditor which was once revised in 2017. The fees to the auditors is recommendatory in nature and for tender ICAI has pre-set minimum fee requirement and such tenders are functional under the supervision of Tender Monitoring Group.

#3. Auditors can be appointed by external authorities like CAG, RBI, NFRA, etc by the means of an empanelment process for all the firms or only Public Interest Entities.

For MSMEs that are held by the State, the auditors are appointed through CAG Empanelment. ICAI is now asking suggestions related to the hiring of auditors for high Public Interest Entities like Public Banks for which the appointment of auditors is done by the ‘Regulator’. Regulators here found it is more relevant to give banks the autonomy in functioning and auditors are to be hired as service providers by the respective banks.

If the auditors are appointed by the Regulators then they must any failure in the audit is credited on them. Such inspections are done by empanelled auditors that are paid by the Regulators or the company that is audited. Except in cases of failed companies, where Regulators tend to appoint auditors, there is no global precedence of Auditors being appointed for Private Sector entities by third-party empanelment agencies.

IV. Restriction on number of partners/audits in an Firm

#4. Policies concerned with the total number of partners/audits in an audit firm:

Directed by the Companies Act 2013, there is a certain limit for audits that can be performed under one audit firm or auditor. There is a limit on the number of audits prescribed in the ICAI standard.  So there has to be a cover on both the number of partners and the total number of audits by a firm so that, firm sizes are capped to limit economic concentration.

Standard Auditing or SA 600 – issued by ICAI deals with the conduct of another auditor. It is a well-established standard similar to the International Standard on Audit, ISA 600. The standard gives directions on the work of component auditors.

The judgement is based on the Internal Audit that is carried on throughout the year and a certificate of Internal Financial Controls is needed by the Auditors.

Banks such as RBI directives also conduct separate audits of the borrowing companies. Apart from that, the Audit Committee is given the responsibility to inspect the internal audits and its worthiness.

Whether an auditor shall disclose the Probability of default of each rated debt instrument for one-year, two- year and three-year in relation to both short term and long term? If yes, in what manner?

Mentioned under Ind AS 109, there are prescriptions of financial instruments along with disclosures.

(a) Are there any amendments required in the qualitative and quantitative parameters included in CAQI?

How can one process with the inspection of audit engagements?

ICAI has inspection instruments (on site and off site) such as  Peer Review (PRB), Financial Reporting Review (FRRB) and Quality Review (QRB) through which they can inspect the Audit Engagements. Currently, the ICAI has come up with the new inspection tool that is a Tax audit Quality Review Board for inspecting the quality of tax audit engagements.

XII. Norms for the resignation of Auditor for all types of Companies.

Is it feasible to mandate the regulations mentioned in the implementation guide of ICAI/regulations under SEBI and are related to the resignation of Auditors for kinds of firms operative?

Till now such regulations are important for large Public Interest Entities.