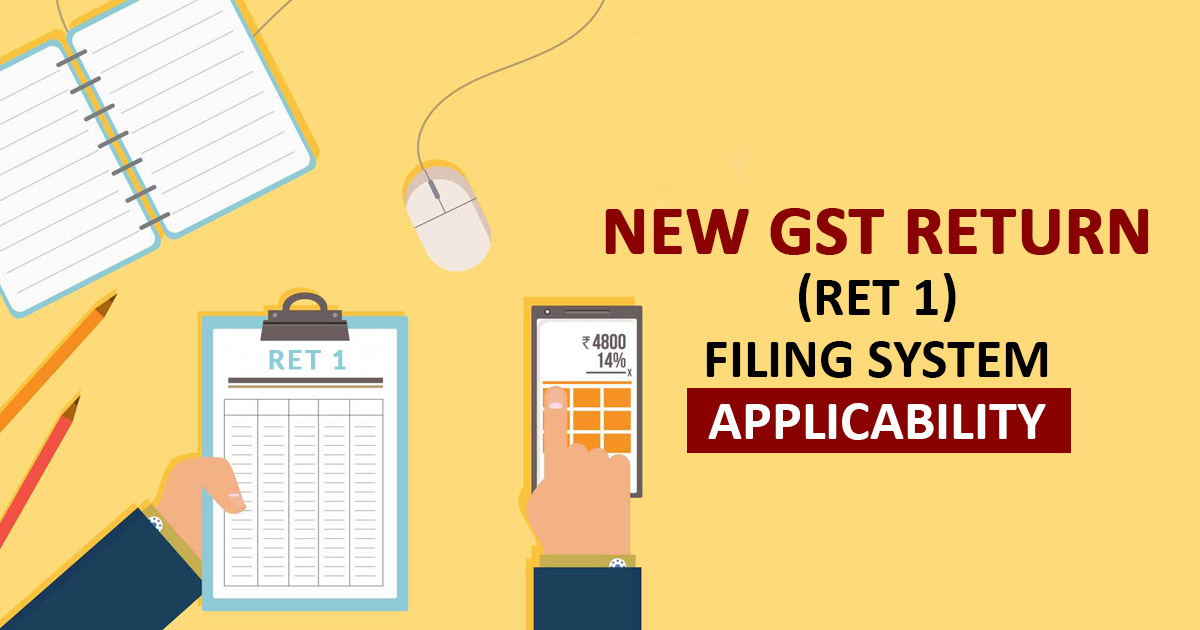 The resurgence of GST mechanism marks the beginning of the trial phase for the same. With the desideratum to make the taxpayers well-acquainted with the revamps introduced in new GST return system, the trial period has been fixed by the Finance Minister.

Note: The FM has announced the RET 1 applicability and approved it in the 35th GST council meeting.

The whole plan has been rolled out by the Finance Minister, and the period from July to September has been finalised as a Trial period. The return form (Form GST RET-1) and two annexures (Form GST ANX-1 and Form GST ANX-2) are the three key components of the new return process. The return has been simplified by the government and the draft of the same has also been released along with some offline utilities.

FORM GST ANX-1 includes all the details of complete outward supplies, inward supplies on a reverse charge basis and import of goods and services to be included invoice-wise (except for B2C supplies) on a real-time basis.

FORM GST ANX-2 includes all the details of inward supplies while the recipient can reject or accept these documents, or tick them as pending, for further concern.

Implementation of new and modified GST return system from October 2020.

According to the notification released by CBIC:

As per the conclusions driven by the 37th GST Council meeting (held on 20 September 2019), the commencement of the new GST return system and the amended forms for the entire taxpayer accumulation in India were postponed till April 2020 against the earlier October 2020.

Simplified Returns and Its Benefits

The simplified returns under GST first came into limelight after the 31st meeting of GST Council. The simplified return mechanism is completely built as per the concept of a single return. Even the frequency of filing the same will also depend on the entity’s generated turnover

What are the Changes?

As far as Form GST RET-1 is concerned, all the taxpayers will have to start using this Form, from January.

In addition, from August, users may import their purchase register in the offline tool and compare the same with the downloaded inward supply invoices to ascertain the disparities.

The July-September has kept as a trial period for taxpayers to acclimate them with the new return system and this is the sole motto behind this. It has nothing to do with the tax liability or input tax credit of the taxpayer, neither it is going to leave any impact on them. The taxpayers will simultaneously file existing return forms (GSTR-1 and GSTR-3B) in this trial period and if they fail to do so, they will be under obligation to pay penalties and interests under the standard norms.

From October, the stringent rules will come into action in a full-fledged way. It will become mandatory to substitute the return GSTR-1 with monthly GST ANX-1 from October for large taxpayers and with quarterly GST ANX-1 from January 2020 for small taxpayers for the quarter period of October-December 2019.

After the trial period, the large and small taxpayers may upload invoices in GST ANX-1 on a regular basis, while GST ANX-2 will be available to be viewed only.

Parag Mehta who is a partner at NA Shah Associates LLP feels that the new return forms are not much simple and easy where the user will need to upload GST ANX-1 mentioning their outward liability, imports as well as inward supplies sprouting reverse charge.

“Based on GST ANX-1, filed by all, businesses will be able to download details of auto-drafted inward supplies in GST ANX-2, he said.

“The trade will be required to accept, reject or keep in pending the ITC on inward supplies. After completion of GST ANX-2, an auto-populated return in GST RET-1 will be generated. All the activities will have to be done on a monthly basis,” he added