Why CA Day Celebrated? What is Its Origin And History

Home > Blog > CA Professionals > Why CA Day Celebrated? What is Its Origin And History 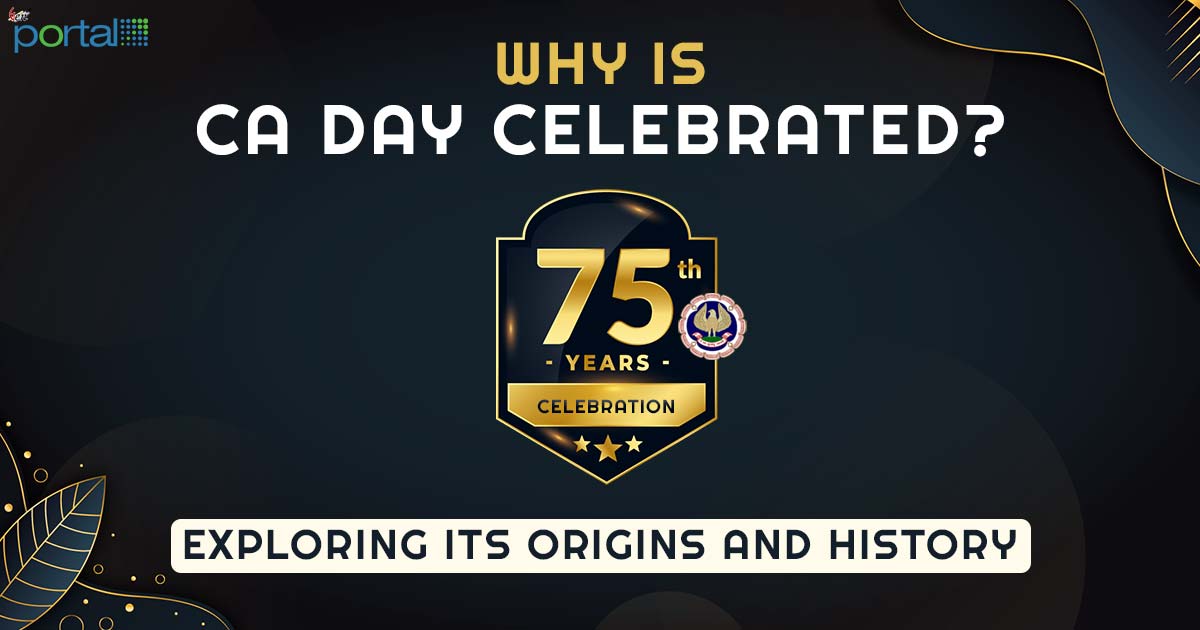 The USP of this profession is the fact that it is the only profession in India that is licensed for the purpose of financial audit of any organisation and across the globe, it is the second-largest body imparting education related to accounting and finance.

It is undoubtedly a matter of pride to be a member of such a big and esteemed body and so to honour these members and their existence, every year we celebrate ca day date on 1st July.

Get to Know 5 Significant Points About ICAI :

Origin and History Of ICAI

The origin of the Chartered Accountants (CA) as a profession can be found in the period before the independence of the country. The Companies Act was constituted by the British government in 193 which included some rules and laws to be followed by the companies. The Act included a list of books which was mandatory to be maintained by the companies registered under the act.

The audit of such was also made compulsory for such companies by a registered auditor. In 1918, a Diploma in Accountancy course was started in Mumbai by the government. The course was quite simial to the present course of CA, along with a training period of three years. All the aspirants who cleared the course were eligible to be appointed as an Auditor throughout the country.

Controversies have risen against the use of the word ‘Chartered’ but it was already under use and hence retained. Hence, when the Institute of Chartered Accountants on India (ICAI) was incorporated under the Chartered Accountants Act, 1949, the use of the term ‘Chartered’ was legalised instead of ‘Registered’. Hence, 1st July is considered as the ICAI Foundation day or CA day in India since 1949.

The word Chartered, as used for Chartered Accountants in India, has no relation with the royal charter of the British since the independence of the country.

The provenance of the CA profession lays back in the days before Independence. In 1913, the Companies Act was passed by the British government in India which mandated the regulation and maintenance of certain books of accounts for every company registered under the Act. In addition, as per the act, it also became mandatory to appoint an Auditor to audit these books.

After five years, a course was launched in Mumbai with the name “ Government Diploma in Accountancy”. This course had the same pattern & standard as of present CA course along with a three-year training period. Those who successfully qualified for this diploma and completed the training of three years were allowed to practice a profession of an Auditor throughout India.

In 1930, the new Government of India (GOI) started maintaining a register of accountants which carried the names of accountants and such individuals were referred to as Registered Accountants.

No step was significant enough to efficiently regulate the profession of accountancy. Then an expert committee which was formed in 1948 suggested the formation of an autonomous body to regulate this profession and so the Chartered Accounts Act of 1949 was passed and the ICAI was formed.

Institute of Chartered Accountants India (ICAI) on the 74th Chartered Accountants Day brings virtual National CA Summit 2020 from 29 June to 1 July 2020. After all this, 1st July has been recognised as ICAI Foundation Day or CA Day 2022 in India to pay tribute to one of the oldest and most dignified professions of India. CA day 2021 is a yearly event to mark the profession of chartered accountants who are the backbone of the country’s economy and its management. CA Portal is active in its coverage of complete news, updates and articles based on chartered accountants day 2022.

The role of a Chartered Accountant is very important in any business organisation, regardless of the size and nature of the firm. An array of his/her responsibilities expands from preparing financial statements and developing financial plans to auditing, tax filings, bookkeeping and so on. So, to Laurel the profession and to acknowledge its importance in an organisation as well as in the national economy, we celebrate CA day 2022 every year on 1st July.

Every organisation has CAs and has its own way to celebrate the day. Some organisations conduct some activities for the CA’s of their organization, some incentivise these great initiatives and some take care of their clients by launching discount offers while conducting awareness activities, parties, donation activities etc on their office premises.