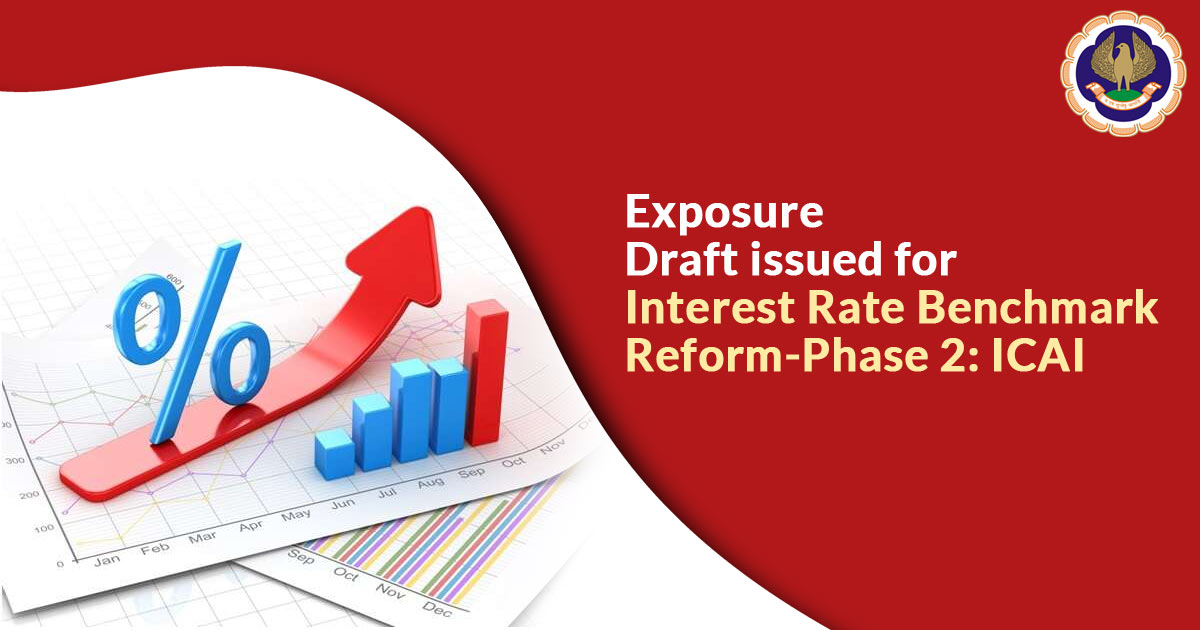 The Institute of Chartered Accountants of India (ICAI)  announced that the institute has issued an exposure draft on the Phase 2 of the Interest Rate Benchmark Reform which contains the proposed amendments to IFRS 9, IAS 39, IFRS 7, IFRS 4, IFRS 16 among others.

The International Accounting Standards Board (IASB) had set a project to its work plan that can ascertain the implication of the reform. The new project found out that two types of accounting issues could affect the financial reporting:

It includes the issues that can affect the financial reporting when there is any kind of trouble in the contractual cash flow that may arise due to the reform. Such issues were targeted in the first phase of the Interest Rate Benchmark Reform.

It includes the issues that can affect the financial reporting when deliberate changes to the contractual cash flow and to avoid the relationships that may arise due to the reform. These issues will be targeted and addressed in the second phase of the Interest Rate Benchmark Reform.

The pre-replacement issues were targeted in the first phase as the IASB considered that they were more important to solve and hence, the first phase was started by the board in September 2019.

Now that the second phase is near, an Exposure Draft is being issued by the IASB for the phase two of the Interest Rate Benchmark Reform, which will be targeting the replacement issues, as described above, that might surface due to the Interest Rate Benchmark Reform which can create a barrier in the contractual cash flows and halting the relationship.

The proposed amendments will be related to:

#1. Modifications in the Financial Assets and Liabilities and the Leases

The companies are prohibited from freezing their hedge accounting system in order to comply with the Interest Rate Benchmark that changes the hedge according to other criteria of hedging.

It is mandatory for the companies to disclose all the information related to the new risks that might appear due to the Interest Rate Benchmark. The company is also required to state the course of action required to manage the transition to the alternative interest rate benchmarks.

The board has assured that they will be considering all the suggestions related to the Exposure Draft to develop a promising draft according to the standards of the Interest Rate Benchmark Reform. The board has opened the line for suggestions in the exposure draft till 25th May 2020. The board is expected to issue the final draft by the third quarter of 2020.

The  Accounting Standards Board (ASB) of the Institute of Chartered Accountants of India (ICAI) invites the comments if the public to the Exposure Draft of the IASB with a motive to allow the stakeholders, who have been raising some concerns about the International Standards setting. The ASB is set to hear all the comments of the stakeholders and the rest of the people.