GST Norms on Insolvency of a Company; Provisions for IRPs

Home > Blog > Notifications > GST Norms on Insolvency of a Company; Provisions for IRPs 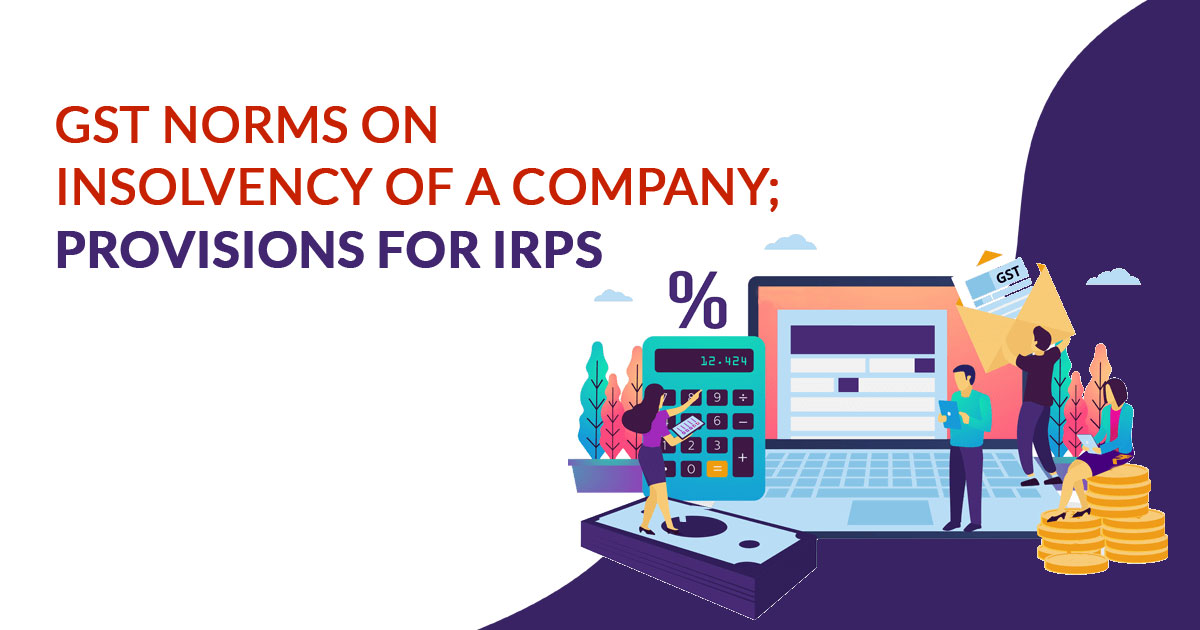 A company is announced insolvent when it has no caliber left to continue with its business and that it is the end of its existence. An insolvent firm is left with no money to repay the loans. Nobody has control over issues like insolvency. A company might go insolvent due to the ever changing market, due to customers switching their priorities or any other reason.

Talking about the resolution of insolvency it is the process where the professional works on how the insolvent company will repay its loans. Earlier it was difficult for creditors and banks to recover the loans until the Insolvency and Bankruptcy Code (IBC) came in 2016.

According to the code for old companies, 180 days are allotted to resolve the loans and could be extended upto 90 days more i.e. total of 330 days (legal proceedings included). For startups, the timeline allotted is 90 days that can be stretched till another 45 days.

Talking about tax payments, there is a specific section in the CGST Act 2017 which states that as per the laws prevalent in any other act or otherwise given by IBS, any amount that remains to be received from such taxable person (tax, interest or penalty), the government will be the first in charge to the property of such taxable person.

Liquidation for companies is a stage where a company is shutting down and is liable to pay the debts through assets. If the company has GST dues then the GST department shall be considered like other claimants (creditors).

The doubt still prevails on the below-mentioned queries, the company while going under liquidation,

All the above-stated queries were also subjected to discussions in the current 39th GST Council Meeting. Paying heed to the conclusions driven from the Council meeting, CBIC has issued the following circulars:

Clarity has been Provided in the following cases:

More Clarifications are sought related to the Provisions of IBC 2016:

a). When the resolution process is over, and the amount of GST liability is recovered with a haircut, in such cases, is it required to file the GST Returns? If yes, how to show the amount of haircut in the returns? Or it has to be canceled or surrendered?

b). Is it needed by the corporate debtor to file the final returns on the date of CIRP?

d). Is IRP/RP responsible to surrender and file the final return of the GST on behalf of the Corporate Debtor?

e). Once the CIRP is over, IRP/RPs are required to give away their registrations? How the unutilized ITC will be treated?

There are several other queries that are sought from the government related to the resolution process of the insolvent company. It is a dynamic topic that comes up with a change and needs to be resolved at that moment only. A clear understanding of the resolution process is still not possible. For an Act to gauge whether it is successful or not it requires about 3 to 5 years and in this case, both the laws, IBC and GST are new once.