Presidential assent to CA, the CWA, and the CS (Amendment) Act, 2021 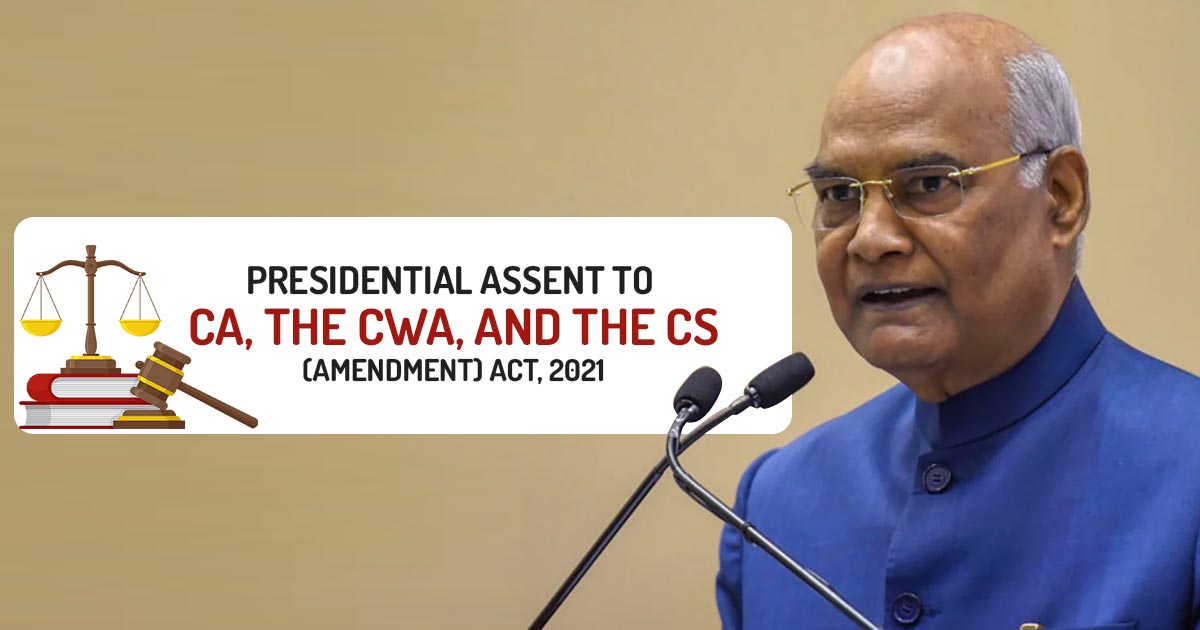 The President of India, Ram Nath Kovind has submitted the Amendment Bill 2021 to the Chartered Accountants, the Company Secretaries, and the Cost and Works Accountants.

The Chartered Accountants Act of 1949, The Cost and Works Accountants Act, of 1959, and The Company Secretaries Act, of 1980 are the bill amends. Under these three acts, it transforms the disciplinary mechanism that points time – limit for disciplinary proceedings. Whereas, the Board of Discipline and Disciplinary Committee shows more external representation which is provided by them.

The Bill made a formation of a committee which goes through the Secretary of the Ministry of Corporate Affairs. However, the Committee will provide you with the representation across three institutes made within the Acts. While the Secretary to each Council will be formed as the chief executive as the head Council by the President. While all the ensured intimations of decisions of the Council will be liable by the President.

Now, organizations should register with the institutes. The Councils should manage a register for the organizations which holds the details involving the pendency of any actionable complaint or imposition of penalty. Under these 3 Acts, there would be particular fines have been upgraded as the bill enhances. In case the owner or a partner of an organization is continuously caught under fault for misconducting for, the last 5 years, there will be disciplinary action can be charged against the organization.

Want to Get a Website for Your CA & Accounting Firm

Roles of the President of the Council

The Bill also includes that organizations should register with the institutes by creating an application to each Council of the Institutes. Also, the Councils should manage a register of the organization that comprises details like pendency of any actionable complaint or imposition of penalty against the firms.

In case of professional or another mischief, the Disciplinary Committees may fall under the act : (1) elimination or reprimand of the individual from the register of the Institute, or (2) upgraded fine which is up to 5 lakh rupees. The bill enhanced the amount of penalty to Rs 10 lakh. The Bill also includes that if an owner or partner of an organization is constantly found culpable of misconduct in the last 5 years, then the Disciplinary Committee might take some particular actions against the organization. And the action involves (1) removing the organization from embarking on activities relates to the profession of charted account, cost accountant, and the company secretary, and also the case might be increased for up to 2 years or (2) imposing a fine of up to Rs 50 lakh.