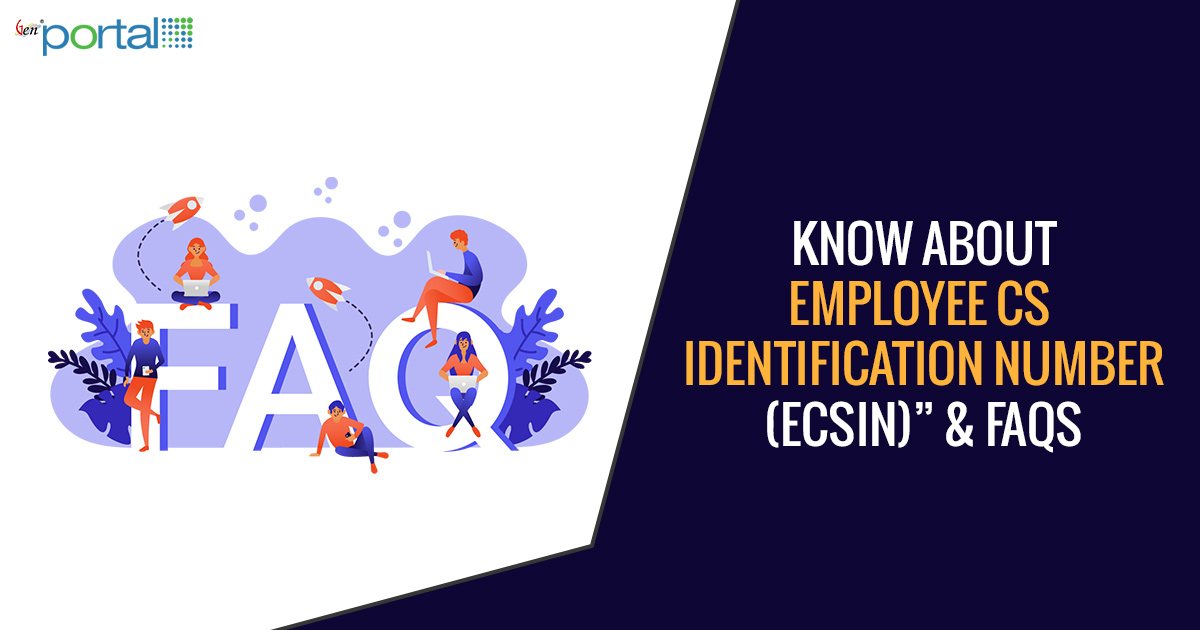 Employee Company Secretaries Identification Number refers to a unique number that every member of the Institute of Company Secretaries of India who is employed in a company has to mandatorily generate at the time of appointment as well as resignation unless guidelines do not exempt the same.

Recently, ICSI issued the ICSI Guidelines, 2019 which states the mandatory generation of the eCSIN. These guidelines became effective on October 01, 2019.

The central aim behind eCSIN is to increase transparency by identifying the organisations wherein Company Secretaries are hired and the appointment of CS’s in a job in consonance with Section 203 of the Companies Act. Therefore, all company secretaries should hold eCSIN number mandatorily from 1st October 2019. In this article, we look at the eCSIN in detail.

eCSIN has to be generated by a company secretary

eCSIN has to be mandatorily quoted on the following documents:

Note: It is mandatory to generate eCSIN on or before 31st December 2019 for the members who have already furnished form DIR-12 as per the companies act.

It is mandatory for every company secretary to generate eCSIN at the time of issuing the consent letter/resignation letter/cessation letter to the employer, until not exempted under the guidelines.

eCSIN is issued by or generated on the request made by the member of the competent authority of eCSIN . The authority is responsible for the allotment, exemption, alteration and generation of eCSIN. Besides, the concerned officials will generate eCSIN w.r.t any member or group of members, including the members excluded by the guidelines.

Information Required For The Generation of eCSIN

Details required to generate eCSIN are as follows:

Process of Online Registration for eCSIN

Step 1: Click on the “Membership Registration” menu and register yourself on the eCSIN portal.

Step 2: Opt for either ACS or FCS and furnish the details like member’s registration number, DOB, etc.

Step 4: ACF or FCS registered members of eCSIN portal have to log in by filling in the user name & password and clicking on the “Login” button.

Step 5: Now you are redirected to the eCSIN generation page.

Step 6: Ensure that your Registration number gets auto-populated and fill all the fields of the eCSIN generation.

Step 8: Registration successful, check the status message or email which is sent to the registered email id of the member on successful registration.

Note: One member can generate only one eCSIN. For the generation of new eCSIN number, the existing number needs to be revoked by the member.

Step 1: Enter the starting as well as ending date to discover the eCSIN number generated.

Step 2: Both active, as well as inactive eCSIN numbers, will be listed on the screen.

Step 3: Download all the active or inactive eCSIN numbers (if you want).

Steps to revoke the eCSIN number are as follows:

Step 1: Search for the active eCSIN numbers > click on the “Cessation eCSIN” button.

Step 3: Click on the “Submit” button and get the updated status of cessation.

Detailed FAQs Based on ICSI eCSIN

Q 1. What is the meaning of Employee Company Secretary Identification Number (eCSIN)?

Q 2. What is the main objective of Employee Company Secretary Identification Number (eCSIN)?

Besides, this is inevitably going to facilitate the members to update their office address in the Register of Members to be kept up by the Institute as per Regulation 3 of The Company Secretaries Regulations, 1982.

Q 3. Is there any charge applicable for the generation of eCSIN?

Generation of eCSIN is free of cost service.

Q 4. How eCSIN is generated?

Only an ICSI member can generate and maintain the eCSIN and that too only at the eCSIN portal. The eCSIN is issued electronically by the Institute on the registered email id of the member.

Q 5. Which details are needed for eCSIN generation?

Details needed to generate eCSIN are as follows:

Q 6. When an eCSIN should be generated?

An ICSI member should generate an eCSIN at the time of issuing the consent letter or the resignation/cessation letter to the employer for any employment under any organization, as a Company Secretary or otherwise unless exempted as per clause 6 of these Guidelines.

Given that the concerned authority of ICSI may assign, exempt, change or otherwise preside over the generation of eCSIN on a member’s special request under special circumstances as specified under the prevailing law or otherwise.

Besides, it is also provided that the Concerned Authority may suo motu generate eCSIN pertaining to any member or group of members encompassing the members exempted as per clause 6 of these Guidelines.

Q 7. What are the circumstances under which eCSIN is Mandatory?

It is mandatory to quote eCSIN on the consent letter for the ICSI members when they are entering into any employment as a CS (KMP) or otherwise.

Another situation under which quoting of eCSIN is mandatory on the consent letters to be affixed with the form DIR 12 is when the ICSI members enter into employment as CS w.e.f. 1st October 2019 and till that date, the same remains mandatory.

Members entering into employment as CS or ceasing from it as Company Secretary (KMP) w.r.f 1st October 2019, shall mandatorily generate eCSIN and mention the same on the related consent/resignation letter, which needs to be attached with e-form DIR-12.

Q 8. What are the exemption of the requirement of eCSIN?

Yes, it is compulsory to generate eCSIN on or before 31st December 2019.

A new password can be generated by clicking on the → “Forgot Password link” and furnishing the membership number along with the date of birth. A new password will be sent to the email id of the member registered with ICSI.

Q 11. What does an ICSI member need to do to Update Designation?

An ICSI member can update his/her designation using the Update Designation menu and providing the details for the below-mentioned fields.

Click on “Update eCSIN” Button to update the respective eCSIN.

Q 12. What is the procedure to revoke eCSIN ?

The user can revoke the eCSIN using the Cessation functionality. For this, the user needs to search for the active eCSIN numbers and click on the “Cessation eCSIN” button to revoke the active number.

Details that the user needs to provide in the Cessation page are as follows:

After furnishing these details, the user needs to click on the “Submit” button for the Cessation. After that, the user gets notified about the updated status.

Q 13. What is the process to Search all the eCSIN generated by members?

To view the eCSIN number list, the user needs to enter the start and end date to and this will display a list of all the active and inactive eCSIN numbers.

The user has been provided an option to download all the eCSIN numbers both in active/inactive status.

The format of the eCSIN signifies:

Para 4 of the eCSIN Guidelines states that the Competent Authority may allot, exempt, alter or otherwise deal with the generation of eCSIN on a particular request of a member under special circumstances which may be needed as per laws prevailing or otherwise.