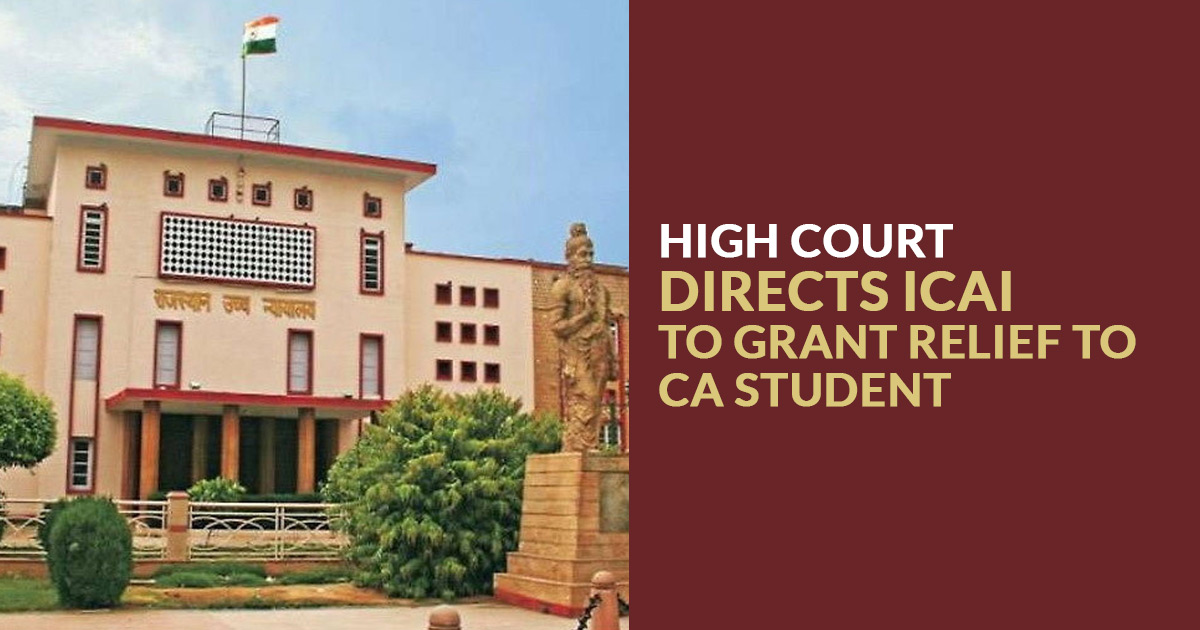 The Rajasthan High Court stated that the Institute of Chartered Accountants of India (ICAI) to post the exam results of a CA student.

The applicant who was a young girl-student of 21 years of age, cleared her CA Foundation Examination in the year 2018 in his 1st attempt. She is subjected to sit in CA intermediate examination conducted for May 2020. Amid 21st November and 14th December 2020, the exams were rescheduled to be conducted because of covid-19. Furthermore, the applicant has opted out of the November exams according to the rules mentioned by the institute and was given admit card to sit in the examination which is conducted from 22.1.2021 to 7.2.2021. On 22.2.2021, like a bolt from the blue, she received an email dated 22.2.2021 from the Dy. Secretary (Examinations) – respondent no.2, telling that her result has been put on hold as of derogatory points she had made in her e-mail. An elaboration was urged for asking the reason why the disciplinary proceedings not be begun upon her for the corresponding.

The applicant then wrote an email to the institute showing her apologies for her improper comments. She moreover states that she lost herself as of constant delay to covid and also because of protective objectives of her and her father. It was argued that she has not been informed of the order/result of the hearing.

The court after reading the email seen that this was addressed to the institute’s President and office beneficiaries and not to the Examination Committee.

“Hence, the Examination Committee ought not have taken cognizance of an e-mail sent to the President of the Institute, unless the President directed it to do so,” the Court stated.

“That apart, in the opinion of this Court, there is hardly anything in the e-mail, for which it can be alleged/ considered as or even construed to be derogatory. May be, the petitioner could have been more calibrated in her emotional utterness and could have avoided some of the sentences, but then also, this Court is unable to countenance respondents’ stand that the contents of her mail were derogatory. The very initiation of the proceedings against the petitioner alleging that the e-mail contains derogatory remarks was uncalled for and unwarranted. On the contrary, this Court feels that action of the respondents was rather over bearing or high handed,” the Court continued.

Justice Dinesh Mehta also directed while throwing away the application in favor of the applicant stating that the institute to provide the original mark sheet and certificate of passing the CA intermediate exam to the applicant and to post the result on the official portal. “While hoping that in future the Institute will not take any such action and take any criticism in positive stride, this Court hastens to add that a professional body like the respondent Institute should introspect and ensure that its overenthusiasm of attaining professional excellence and endevours of setting high standards of discipline should not silence rather stifle the speech of a student or its member in the manner that has been done in the present case,” the Court declared.