ICSI: New Set of Auditing Standards to be Followed by Member 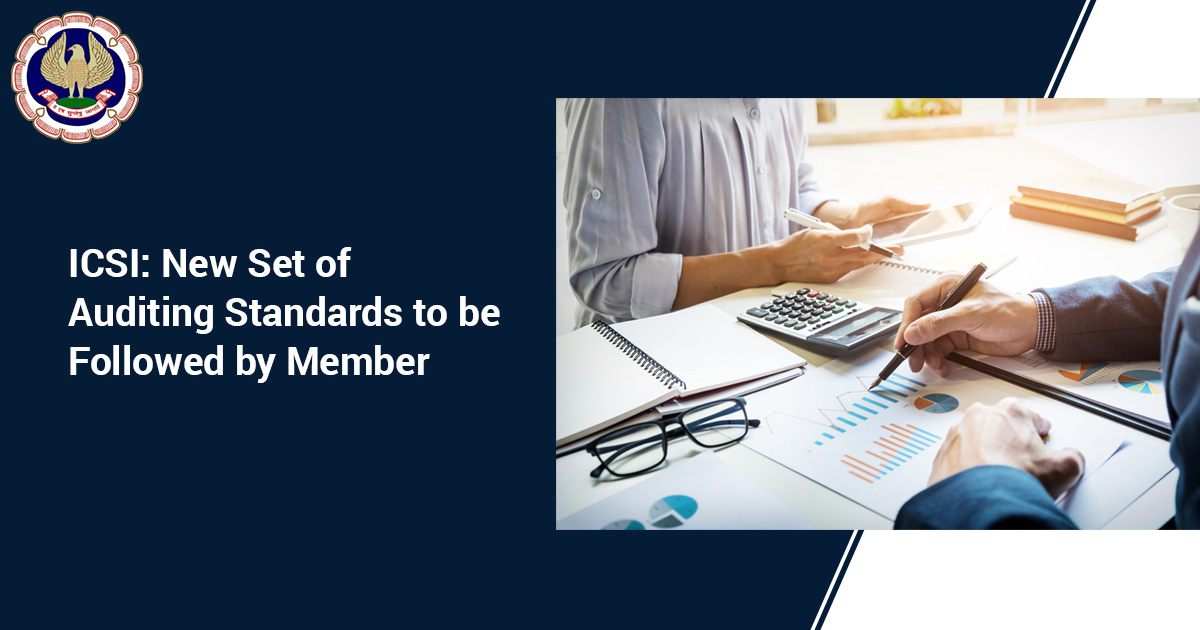 Institute of Company Secretaries of India (ICSI) has come up with the all-new set of protocols for Auditors in India. These new Auditing Standards will mandatorily be practiced from 1 April 2020 (just after the end of the current Financial Year).

The writeup aims at highlighting all the new Auditing Standards designed by the ICSI for near future audits.

From the standards listed below the first three standards can be referred for any kind of company audit but the fourth one is especially for the Secretarial Audit U/S 204 of Companies Act, 2013.

The applicability of the said Auditing Standards in every audit will be supervised by the Company Secretaries as they own expertise in auditing methods, tools and techniques. This will make the audit errorless, professional, uniform and fast.

Provincial Civil Services (PCS) can ask for the following audits:

ICSI has issued a set of Guidelines on Auditing Standards that will clearly explain the audit process and real-time applicability/significance of provisions incorporated in ICSI Auditing Standards (recently introduced by ICSI w.e.f. 1 April 2020). The guidelines will thereon facilitate the concerned individuals with respect to document compliance. Not only that it will help the CS to enhance the quality and accuracy of the audit they are conducting.

Aim behind Reconstructing the Auditing Standards

Below are some prominent reasons for introducing the new auditing standards:

Standards on Audit Engagement direct the auditors with their roles, powers and responsibilities while conducting the audits. The section contains guidelines on the process of coming into an understanding agreement with the Authorities for audit purposes. With effect from 1 April 2020, the standards will mandatorily be followed by the Auditors all over the countries.

AIM: To give a common set of principles and procedures to the auditors when it comes to conducting the audit. The entire accumulation of certified auditors is required by laws to follow the same Auditor Engagement Standards.

Protocols set for the Audit process and Documentation are mentioned under this section. The particular segment takes care of the audit process and preparation of documents done by the auditors. Again it is the list of instructions to the Auditor which he/she needs to follow without fail in order to successfully accomplish the process of Audit.

The auditor must follow the instructions while doing paperwork for the audit from start till the end so that there is no chance of rejecting the prepared documents. The section is applicable on a mandatory basis from 1 April 2020.

#1. Details of the Auditee

#5. Pooling and then validating the Audit Proofs

#6. Confirmation from the third party

#8. Maintaining the records and preserving them for future reference

The section deals in the basic etiquettes that might be used by the auditor while forming an opinion on the subject matter of the audit. The standard is applicable only when the Audit Engagements are accepted by the Auditor. Or when it comes in effect i.e. 1 April 2020 onwards.

AIM: The list of protocols under this segment are set to facilitate the auditor with the standard etiquette for evaluation of the conclusions fetched from the Evidence acquired by them and express their opinion on the same in a writing.

1. Standards for forming an opinion.

3. Opinion in a written form from the third party.

4. Form of the Opinion

The segment focuses on the basic etiquettes to be followed while carrying out Secretarial Audit u/s 204 of the Companies Act, 2013 and SEBI (Listing Obligations and Disclosure Requirements), 2015. The standards for Secretarial Audit Engagements will mandatorily be followed by all the auditors from 1 April 2020 onwards.

AIM: The standard is set with the aim to regularize the statutory compliances and corporate conduct at the time of Secretarial Audit made as per section 204 of the Companies Act, 2013 and SEBI (Listing Obligations and Disclosure Requirements), 2015.

1. Identifying and validating the applicable laws.

2. Verifying the corporate conduct and compliance of laws.

5. Fraud Reporting (if any)

6. Analyzing and Bringing forth the actions having a major relation with Auditees Affairs.

Auditing standards are introduced by ICSI with the aim of regularizing the audit conducts and to have a single protocol for the auditors all over the country.