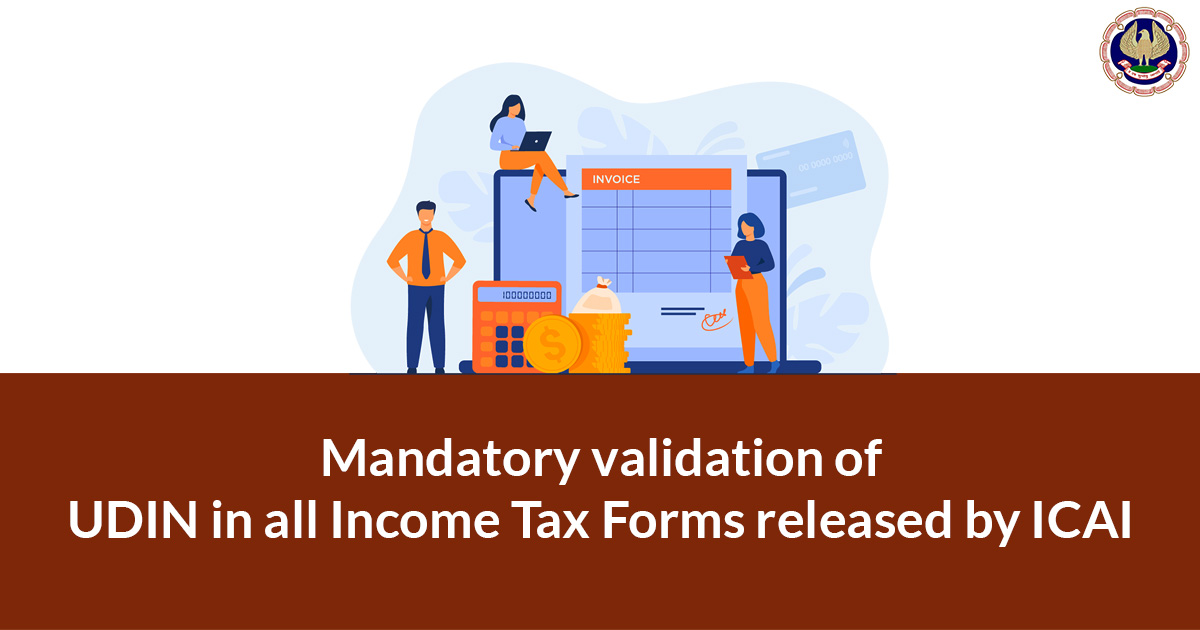 An Advisory on Mandatory validation of UDIN in all IT Forms has been released by the Institute of Chartered Accountants of India ( ICAI ). And according to a press release released in the month of November, CBDT is verifying the Unique Document Identification Number (UDIN) which is generated from the ICAI portal during the time of uploading tax audit and other income tax reports.

Now, Tax reports or forms will be considered valid only when their UDINs get successfully validated by the e-filing portal of CBDT. The CA can complete the process either immediately or during the additional 15 days time period provided by the authorities to update its UDIN on the CBDT e-filing portal.

The Central Board of Direct Taxes (CBDT) has again extended the last date of updating the Unique Document Identification Number (UDIN) at the e-filing web portal of the Income Tax Department from August 31, 2021, to 31st January 2022.

UDIN is being validated by the online e-filing portal along with ICAI’s UDIN portal on three parameters:

Therefore, If CA selected a form number on the UDIN portal while generating the UDIN, then he/she need to select the same form number on the e-filing portal during the updation of UDIN at the time of uploading report or within 15 days buffer time after that.

As per ICAI, the CBDT has granted a one-time waiver by allowing UDIN to be updated for the latest forms by December 31, 2020, to make these forms valid. For the same, such members are requested to update the UDINs on the e-filing portal as soon as possible, but no later than December 31, 2020, for all concerned, IT forms uploaded from April 27, 2020, to November 26, 2020, by them.

For the convenience of members, tutorials with steps and screenshots are also made available by the authorities on the portal. Members need to keep in mind that UDIN will be treated as used only when it is accepted by the taxpayer. After updating the UDIN by the member, the e-filing portal automatically verifies it and if it is found to be not verified the portal will show an error message.

ICAI also reminded that now the Form or tax audit report without valid UDIN will be considered invalid if the valid UDIN has not been updated within the permissible time limit of 15 days. Another fact is that the IT form will be considered valid only if it has a valid verified UDIN and the taxpayer has accepted the form. it is also recommended that the member should file the tax audit report without waiting for the last date.